A few weeks back, I hopped on an airplane and headed to Columbus, Ohio to film an episode of ETWN’s The Journey Home, hosted by Marcus Grodi.

I was met at the airport by Scott Scholten and his wife Barb. Scott produces and directs the show, and they also have a special B&B apartment in the basement of their home to host many of The Journey Home’s guests.

I had read other articles about people who had been on the show, and was very excited to see the famous “Guest Book,” where many notes and signatures from guests of the program reside. It was a surreal moment adding my name to that list, especially considering that two years ago, I was closer to leaving Christianity entirely than I was to becoming Catholic. 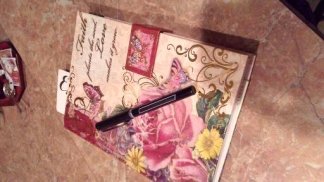 And let me tell you this, the Scholten’s are experts at hospitality. I was so blessed to be able to stay in their incredibly comfortable accommodations. Every little detail was attended to, and I was made to feel like a member of their extended family.

We had lovely conversation over dinner and breakfast the next morning, and then it was off to Mass at this beautiful, quaint, historical Catholic church near the Coming Home Network headquarters, where we would film the show.

I caught sight of Marcus Grodi in the back of the church and we made a quick wave ‘hello’ to each other during the giving of the peace. I knew from my hosts as well as other guest posts about the show that Marcus doesn’t spend much time with guests before the filming begins. He wants to get to know each guest and his/her story for the first time genuinely during the taping.

Walking onto the set was also very surreal. I had seen this set before in the shows I had watched. There were some people who were very important and encouraging to me on my faith journey who had sat on the same side of the desk I would sit on soon. Scott Hahn, Jennifer Fulwiler and Steve Ray were a few that immediately came to mind. But there are many others.

The show used to be filmed live, and still tapes as though it is. There are no re-do’s, just a 2 minute break in the middle. It was a bit intense to think about at first, but everyone is so kind and welcoming. I was definitely on high alert and excited, but once we started filming it felt more like a conversation. I didn’t forget about the cameras and people in the shadows of the lights, but Marcus Grodi is a very gracious host, and it was easy to tell him my story.

He listened so well. I don’t remember everything I said, but I do remember there were a couple of things he brought up at the end to help a point I had mentioned earlier come full circle. He asked great questions to help me elaborate on some things. You can tell Marcus is a pro. I told my story pretty much from birth to life after conversion, and felt like the time flew by. We then answered a couple of email questions, filmed a short promo, and that was it! 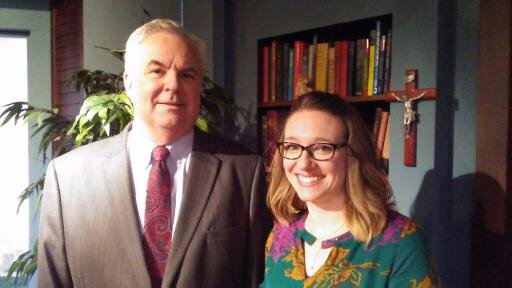 After filming, some of the Coming Home Network folk took me and the other guest out to lunch, then it was back to the airport and home again. It was a whirlwind, but one I will never forget.

I also don’t think it will ever cease to amaze me that my story is now counted among those that made a huge difference to me as I prepared to enter the Catholic Church, and even still after. Those stories were a lifeline as I wrestled through questions, dealt with loneliness and difficulty in the transition from our Protestant Church, and as I rejoiced in the Truth I had found resided within the Catholic faith.

I hope you will have the chance to watch my Journey Home. It airs Monday, December 18th, 2017 at 8pm Eastern/ 7pm Central on EWTN. If you don’t have EWTN, you can live stream it here online.

Or Watch the whole episode below!

My written conversion story is also featured in the Coming Home Network’s newsletter this month, and can be found here.

Hi, I'm Lorelei, Catholic convert and debut author of middle grade contemporary fantasy The Circus of Stolen Dreams, which released Sept 2020 from Penguin Random House/Philomel! I'm a former classroom teacher and instructional coach. I live outside Chicago with my husband, 4 spunky kiddos (who I homeschool) and our dog Saint. I love spending time with my family and eating anything chocolate. View all posts by Lorelei Savaryn

51 thoughts on “My Experience on EWTN’S The Journey Home”

Hi, I'm Lorelei, Catholic convert and debut author of middle grade contemporary fantasy The Circus of Stolen Dreams, which released Sept 2020 from Penguin Random House/Philomel! I'm a former classroom teacher and instructional coach. I live outside Chicago with my husband, 4 spunky kiddos (who I homeschool) and our dog Saint. I love spending time with my family and eating anything chocolate.